Malcolm McLaren, the former manager of The Sex Pistols and the man who claimed to have invented punk, has died aged 64.

McLaren died in New York this morning after a long battle with cancer.

His spokesman, Les Molloy, said the impresario had been suffering from cancer for some time and he expected his body would be returned to the UK shortly. 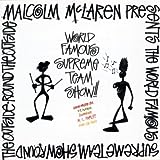 « South Park: You Have 0 Friends (Season … all your morimoto@gmail.com are belong … »
検索
関連記事
プロフィール